The Sword Swallowers Association International was founded in 2001 by the current President Dan Meyer. The idea was to register all sword swallowers around the world, share experiences, to convey appearances, collect money for injured sword swallowers etc.

Since 2008 the SSAI organized the annual World Sword Swallower´s Day in conjunction with Ripley´s – Believe it or Not! This holyday always takes place on the last Saturday in February at all the Ripley´s museums around the world.

2015 I also went to World Sword Swallower´s Day in Florida. This time Dan Meyer and I went to Ripley´s Believe It or Not! in Orlando. There we set some personal World Records. After World Sword Swallowers Day I became the official European Representative of the SSAI.  My responsibilities now extended to the European area.
So far I have achieved some success in the search for new and current and old sword swallowers.

2015 I could achieve that I and the SSAI be the contact for sword swallowing world records for the Rekord-Institut für Deutschland (RiD).

In December 2015 I was admitted to the Hall of Fame of the SSAI. 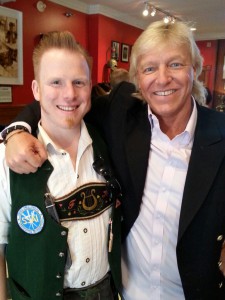 Cooperation of SSAI an the German-Rekord-Institut